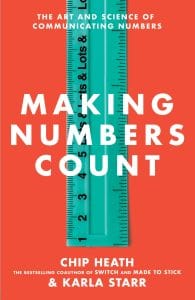 , opens a new windowHow much freshwater is there in the world?

Well, 97.5% of the world’s water is salt water. The remaining 2.5% is freshwater. Of that, only .025% is actually drinkable by humans, and not trapped in glaciers or snowfields.

The problem with these numbers - and many of the number-heavy ideas we read about everyday - is that we can’t make sense of them. They’re not concrete enough for our minds to understand quickly and easily.

We need numbers, though; They’re an extraordinarily powerful technology. But they are a technology bolted onto a human brain not evolved to understand them.

That’s why Chip Heath and Karla Starr wrote Making Numbers Count: The Art and Science of Communicating Numbers. They want non-math geeks to have skills to make numbers understandable, and actionable, for everyone.

Heath is a professor at the Stanford Graduate School of Business and works with doctors, military officers, and investment bankers teaching them how to translate dry statistics into memorable anecdotes and analogies. Co-author Karla Starr is an award-winning science writer, and journalist.

Starr and Heath aren’t advocating for new ideas in math, specifically. Rather, they seek to create a new communication style out of old math, from a distinctly different perspective.

The book uses approximately 30 principles that explain how to present stats, and describe distance, time & space, scale, patterns, progressions, and more. Readers will learn how to translate mega-digit numbers into a few sentences that make better sense of our world.

They use many great examples that give us that refreshing ahh moment when we see something complex in a more simple way. Particularly, the authors ground examples in the personal and familiar, and using emotional cues, and demonstrations.

For example: Did you know that it’s possible to listen to 5 gigabytes of stored music during a daily two-month work commute without repeating a single song? Or that a 1cm tumor is about the size of a pea, but a 10 cm tumor is the size of a grapefruit?

Other examples come from history. Florence Nightingale was an avid numbers translator. She used her math skills and the small basket concept to explain deaths in the Crimean War. During the first 7 months of the war 7,857 troops out of 13,095 died. Her translation: “We had 600 deaths per 1,000 troops.”

For the fresh/salt water example, they recommend this translation:

Imagine a gallon jug filled with water with three ice cubes next to it. All the water in the jug is salt water. The ice cubes are the only freshwater, and humans can only drink the drops that are melting off each.

It’s simple, clear, and much easier to understand.

Ideas like this make this book an enjoyable, fun read. This is definitely a keeper if you’ve got .006 shelf-feet.

Or better put: about a thumb’s worth of shelf-space on your bookshelf.

We welcome your respectful and on-topic comments and questions in this limited public forum. To find out more, please see Appropriate Use When Posting Content. Community-contributed content represents the views of the user, not those of Grand Rapids Public Library